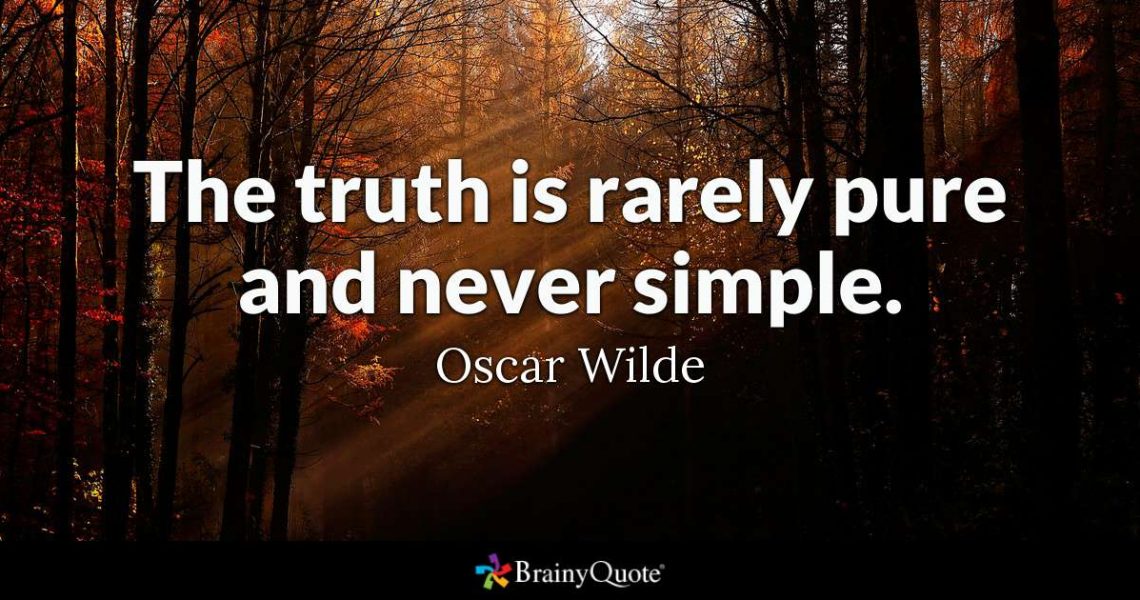 The Truth is rarely pure and never simple.

I believe there is an absolute truth.

There must be absolute truth because there are absolute laws in this universe that we cannot change, nor influence. Or at least we are too small, have not enough power or wisdom to do so.

But what about the others? Really, nobody gets it, only those who wrote the Bible? Is there only one way to be the Truth, ultimate Truth?

Claims are easy to be checked upon; or maybe not. The proof is outside of our reach, outside of our system. Those who depart see the entire truth; at least we love to believe so. Nobody came back to tell us. Although… the near death experiences of people who did not make it to the other side testify that there is one constant thing: a light; a friendly presence; a person; an infinite love, energy… But all these already believed on this side that  such thing exist. I still would like to speak with someone who did not believe and had a near death experience and saw the same thing.

We are all biased.

There is a story of two people who died and found themselves in different positions:  Hades and Paradise. There is an abyss in between. The story is also in this unique book and is told by the unique person of Jesus, claiming to be the Son of God.

Is this the truth? Can we test it, prove it? In the same book God challenges mankind to prove Him, reason with Him. He wants us to research and find out the truth. Yet the longer we seek, the more ramifications of the truth we find.

There is a story of an elephant that stepped into an ant mussels and all the ants climbed on him, were all over the place on him. And the ants tried to figure out what is this thing that destroyed their home. Definitely it was big and heavy enough to just pulverize all their hard work of ages. Some said: „he has a hard surface, shiny and slippery“ „no!“, exclaimed the others „is hard but not slippery, is raw, has so many denivelations“ while others said. „what are you speaking about? he is wet and dripping, we cannot even go anywhere“.  Can you guess that these ants reached different parts of this elephant and could not make sense of the whole?

What if this Eternal, this Absolute, this Truth is so vast, so filling the entire Universe, that we cannot even recognise it and describe it properly? „I am the way, the truth and the life, no one comes to the Father than through me“. This is what Jesus claimed.

This brings lots of outrage in the world. „I have a right to the truth also!“ „how dare say only one religion, one way is truth?“ How can this be the only one universal ever valid truth? Don’t we all have God?

Yes – we have our own truth about God, the Highest Being, the Universe, The Ultimate Force. People perceive Him in so many ways… Yet there is only one way to His heart, the very Essence of this Being.

It is quite possible that is only one way to reach this Essence – by getting acquianted with the Offspring of this Essence, the one who claimed he comes from him.

There are many ways of chemical reactions that have as result molecules of water.

Yet there is only one way atoms can connect to form water.

Truth is never simple – and is rarely pure.

And then there is a truth that is above all other truths; is either take it or leave it.

The truth will always cause a strong reaction and lots of debates.

If we would all collectively understand that we each have a glimpse of the reality of truth and we would collectively examine and compound all our information about this truth – we will eventually agree that is also only one way to the essence of this truth.

As I read the end of the prophecies I realize that this will never occur. Humans are too fond of debating and discussing theories. The ancient writer already said: „controversies and semantics, out of which come envy, strife, abusive talk, evil suspicions, and constant friction between men of depraved mind who are devoid of the truth.“

It necessitates meekness to seek out and accept the truth.